Franchise  |   My Account  |   0 items: $0.00
Next-Generation of protection for the New Generation of Germs.
See Our Process
Home > Blog

Why Is MRSA so Dangerous?

1.97k
Facebook Twitter LinkedIn Pinterest WhatsApp Email Copy Link Your browser does not support automatic copying, please select and copy the link in the text box, then paste it where you need it.
MRSA stands for methicillin-resistant Staphylococcus aureus. The specific strain of bacteria that causes MRSA is known as Staphylococcus aureus (S. aureus), commonly referred to as staph, and there are over 30 different types that can get you sick.

According to an article published by the National Center for Biotechnology Information (NCBI) titled "Predictors of Mortality in Staphylococcus Aureus Bacteremia," MRSA's incidence rate, or the number of new cases within a given period, out of 100,000 people, estimates that 20 to 50 people a year could have a case of infection. And out of those 20 to 50 people, between 10% and 30% could die from staph infections.

The NCBI article also stated that staph infections, including MRSA, " account for a greater number of deaths than from AIDS, tuberculosis, and viral hepatitis combined."

Staph has been around a long time. It can exist on your skin without causing any problems, but when staph enters the body through cuts and gets into the bloodstream, that's when the person gets infected.

Staph was first identified in 1884 by German scientist Friedrich Julius Rosenbach. Staph infections were treated topically until the introduction of penicillin, the first antibiotic, in the 1940s. Then, treatment evolved to a variation of penicillin called methicillin. MRSA's resistance to this antibiotic is how it gets its name.

The article explained that MRSA was initially only found in hospital settings and was suitably named hospital-acquired MRSA (HA-MRSA). Later on, MRSA spread to places outside hospitals and was then called community-acquired MRSA (CA-MRSA). The distinction between the two goes beyond the sites of contagion. CA-MRSA and HA-MRSA are two strains that have different virulence and resistance features.

However, nowadays, both variants are resistant to more than just methicillin and penicillin. They're also resistant to antibiotics like amoxicillin and oxacillin, as described by the Baylor College of Medicine: Methicillin-Resistant Staphylococcus Aureus (MRSA) article. But why is it that staph turned into MRSA in the first place?

Why Is MRSA Resistant to Antibiotics?

MRSA developed resistance to antibiotics as a natural evolutionary process. It has to do with the bacteria's exchange of genetic information of the same species, which we will go over soon. First, it's essential to mention the role of antibiotic over-prescription in the development of antibiotic resistance (AR) in bacteria like MRSA.

A study by the CDC revealed that 1 in every 3 antibiotic prescriptions is unnecessary. They found out that doctors often prescribed antibiotics to treat colds, the flu, or sore throats, which are respiratory conditions caused by viruses that do not respond to antibiotics.

When doctors prescribe (or over-prescribe) these antibiotics, they expose bacteria that's already in the body to antibiotics. Bacteria that are not specifically targeted by the antibiotic prescribed will not die. Instead, those bacteria will have the opportunity to adapt and develop resistance. Then, when those bacteria share their genes with others, they will pass along the same qualities.

The increase of antimicrobial resistance (AMR) in bacteria like MRSA prompted government agencies such as the CDC, FDA, and Department of Health and Human Services to develop a Public Health Action Plan to Combat Antimicrobial Resistance.

They're raising awareness about the dangers of overprescribing antibiotics. They collectively want to prevent bacteria like MRSA or other illness-causing germs from developing resistance to modern treatments.

AR is one of the most important global health challenges of our time. According to the "CDC's 2019 Antibiotic Resistance Threats Report," 28 million people acquire antibiotic-resistant infections (including MRSA) each year, just in the U.S., and of those people, about 35,000 of them perish. AR is a serious threat all around the world. We might use antibiotics to fight infections, but bacteria learn and fight back.

The CDC's article, "How Antibiotic Resistance Happens," states that MRSA's resistance to antibiotics comes from the bacteria's ability to "bypass the effects of the antibiotic."

Antibiotics target specific processes within the bacteria's cells. Bacteria like MRSA simply develop new processes to avoid using the ones targeted by the antibiotics.

Those new processes are stored in their DNA and can be shared with other bacteria of the same species. But there's been a recent new development on this front. Scientists are reevaluating what they previously thought they knew about the DNA exchange between species of staph bacteria.

In May of 2021, the German Center for Infection Research released an article called "From Harmless Skin Bacteria to Dreaded Pathogens," explaining that scientists have discovered how S. epidermidis, a relatively harmless bacteria, turns into a deadly pathogen that can cause "infections in catheters, artificial joints, heart valves, and in the bloodstream."

The cell walls of bacteria are made up of teichoic acids that cover the surface of the bacteria. This study found that the S. epidermidis contained an extra gene cluster that could allow bacteria to develop teichoic acids in its cell walls that are normally found in staph bacteria.

Researchers found that this gene cluster allows the S. epidermidis to penetrate the tissues of the human host and become dangerous. And it also makes the exchange of genetic information between staph and S. epidermidis, two different species, possible. This new development is considered a step forward to developing a vaccine and better treatments for infections caused by both bacteria.

As it stands today, the main method of treating MRSA is with antibiotics. Since prevention is the best course of action, we have outlined a few simple recommendations to help you reduce the risk of infection from both CA-MRSA and HA-MRSA.

According to the CDC's MRSA index, these are the steps you need to take to reduce the risk of acquiring MRSA:

But how can you know if you need to seek a doctor to get treated? First, pay attention to your symptoms. The symptoms of being infected with MRSA vary. It depends on what part of your body caught the infection.

For example, if you were infected with MRSA on your skin, you would probably see swelling and redness. Your skin will feel warm to the touch, and you might experience some pain. MRSA can be difficult to diagnose without laboratory tests to tell if the infection was indeed caused by it or by another type of bacteria. Getting medical care early on is the best course of action if you think you might have MRSA.

The Cleveland Clinic, in its "Methicillin-Resistant Staphylococcus Aureus (MRSA)" article, outlines how MRSA is treated:

For more information on specific treatments for MRSA and the antibiotics that can treat it, please visit the IDSA Guidelines on the Treatment of MRSA Infections in Adults and Children on the American Family Physician website.

Because of its resistance to antibiotics, the best course of action is prevention.

Sanitizing and disinfecting surfaces is the key to preventing staph infections, but just using any product or service to sanitize and disinfect isn't going to cut it. It's important to use the right products that are EPA-registered, and on the label, it should list that it can kill MRSA and other germs of concern.

It's also crucial to follow the instructions on the product's label since most solutions need to sit and dwell on surfaces to work. They also have varying strengths, so review the label's instructions to adjust concentration levels by diluting them with distilled water.

The best way to sanitize and disinfect to prevent MRSA is to hire a service like Germinator to provide 360 degrees of protection for surfaces, air, and you, creating livable, touchable Germinator Zones.

Here's how our patent-pending process will take care of your surfaces: 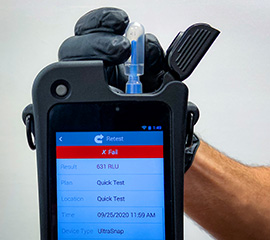 We first test your surfaces for ATP using a luminometer to detect light that can come from cellular activity. This measurement immediately tells us the level of cleanliness on your surfaces.

Step 2  Application of HOCl Surface Treatment:
Our HOCl or hypochlorous acid solution is a one-step cleaner and broad-spectrum sanitizer and disinfectant treatment. Derived from naturally occurring minerals, HOCl not only eliminates odors at their source but kills a wide range of bacteria, including Staphylococcus aureus, MRSA, Salmonella enterica and Pseudomonas aeruginosa, and viruses including norovirus, rotavirus and adenovirus on hard, non-porous, environmental surfaces. It meets the Association of Official Agricultural Chemists (AOAC) germicidal spray standards for Hospital-Grade Disinfection and is on the EPA N List of products determined to meet the criteria for use against SARS-CoV-2, the virus that causes COVID-19. As a result, this treatment will eliminate bacteria and viruses that may reside in your environment without the use of harsh chemicals or fumes. 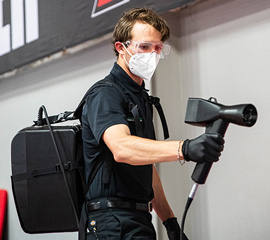 The Shield is a water-based quaternary ammonium compound that imparts a durable bacteriostatic finish to a wide range of non-food contact surfaces. It is EPA-registered as effective against the growth of mold, mildew, algae and odor-causing bacteria. This application creates an invisible barrier that combats deterioration and discoloration and promotes freshness for up to three months.

These solutions are applied with an electrostatic sprayer, which is the most efficient and effective means of delivering the products to the intended application sites. 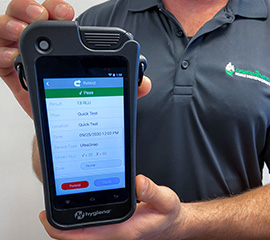 After our surface treatment and protectant services, we retest to ensure the surfaces have achieved the intended results.


Our Aerus products powered with ActivePure Technology will help you protect the air you breathe from contaminants. Visit our Germinator-Aerus Distributor page to learn more about them.

And for personal sanitizing protection, visit our Germinator Zone Solutions page, where you will find all the sanitizing and disinfecting products that Germinator has to offer to help protect you against the new world of germs. Call us at 855-NO-GERMZ (664-3769). We will be happy to answer any questions you may have about our services and products to help you enjoy your very own Germinator Zone.

1.97k
Facebook Twitter LinkedIn Pinterest WhatsApp Email Copy Link Your browser does not support automatic copying, please select and copy the link in the text box, then paste it where you need it.
Don't Miss These Other Must Read Articles 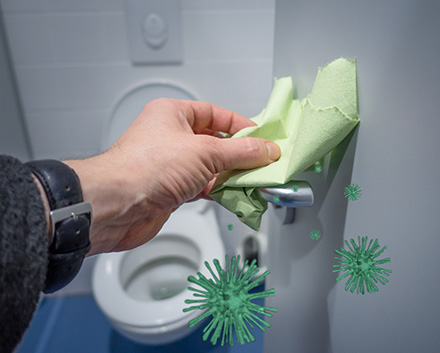 Why Is It Important to Sanitize? 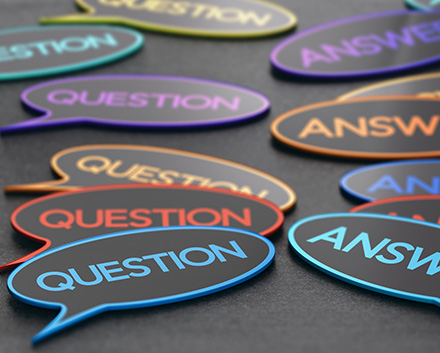 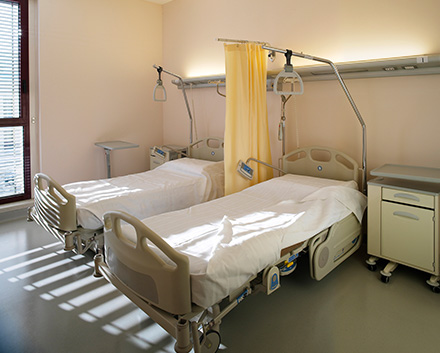 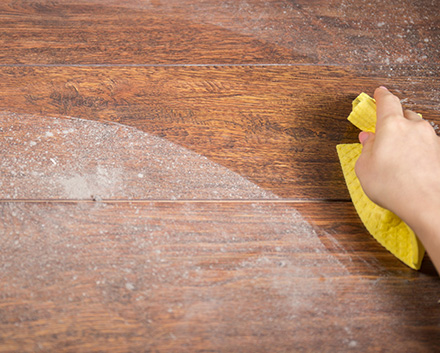 Cleaning, Disinfecting, and Sanitizing: Is There a Difference?
Recent Posts
Most Popular
Archive
Join Our Newsletter!
This website uses cookies to help provide you the best experience possible. See our Privacy Policy for more information. By continuing without changing your cookie settings within your browser, you are agreeing to our use of cookies.
Accept